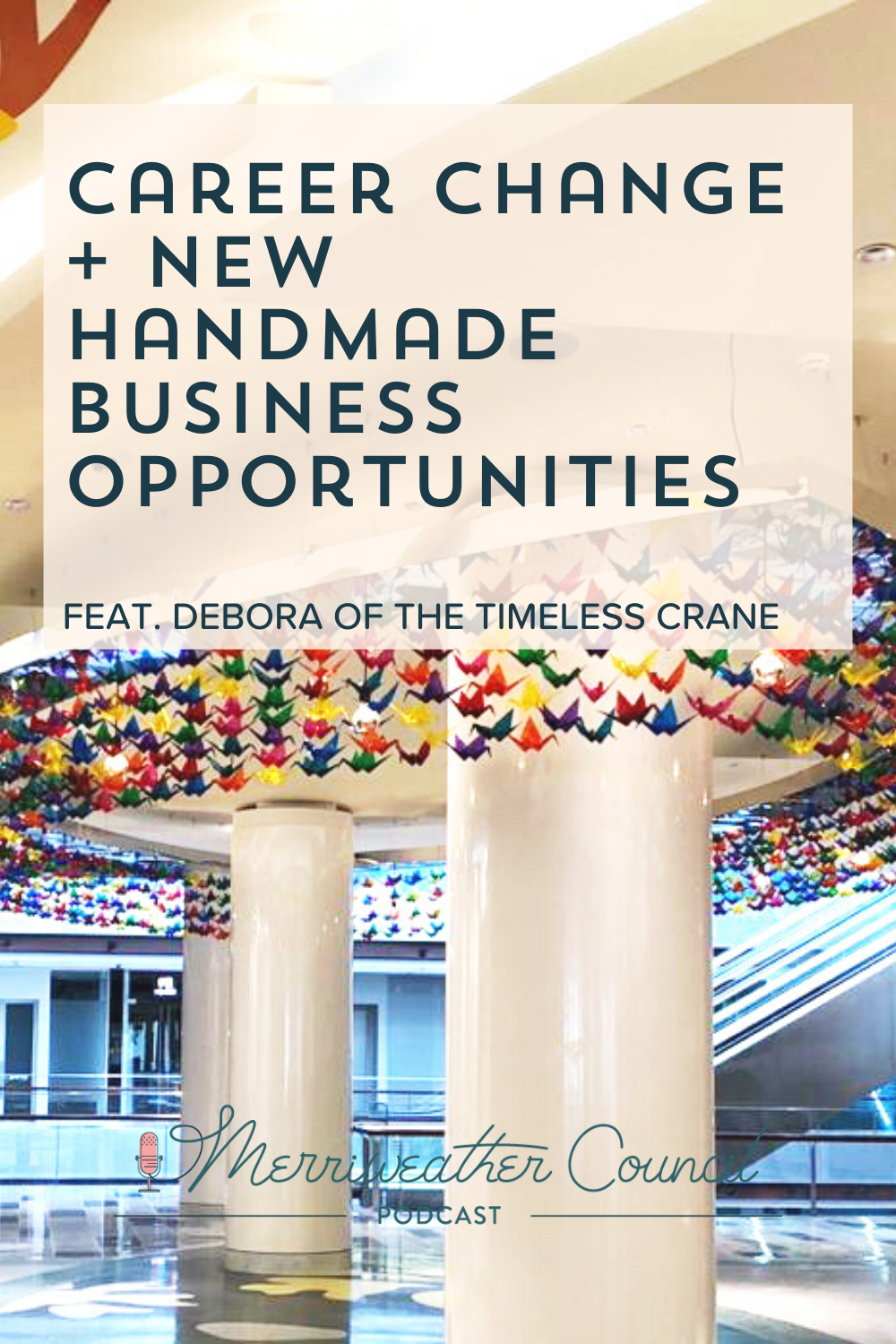 Today on the podcast we have Debora from The Timeless Crane talking about her experience as a maker in business, new handmade opportunities, and a member of The Council. I can’t wait for you to hear about Debora’s story and her time inside of The Council, particularly how it helped see the success she wanted as an artist, and develop even more as a full time business owner!

A bit about Debora from The Timeless Crane

Debora is the hands behind The Timeless Crane. She makes handmade origami mobiles of various animals and shapes, but mostly (as her name suggests) cranes! She began making them in 2007 but dove in more seriously in 2012. She has been folding origami since she was a child in the fourth grade.

Debora was a med school student, and one day right before she was starting her clinical rotations she just came up with the mobile idea on a whim. She made one, and then another, and another! Her friends loved them and told her to consider selling them. That’s how so many maker-in-business stories start, isn’t it? (If that’s your story, you will appreciate Debora’s journey even more!) As many makers do, Debora began her site and Etsy shop as a side gig and creative outlet. After her clinical rotations, she decided she would rather be an artist and left her medical career behind!

When asked about how she came to the decision to leave, Debora explains that she really didn’t have much of a plan. She just knew she dreaded work and really wanted to be doing more with her hands. To me, that is as good enough a reason as any! We love hearing from makers who have created their own non-traditional career paths.

We are honored to be a small part of Debora’s story!

Debora has been part of The Council from day one. Making the decision to join came from her lack of business experience. She was home with her children and treated her business as a side gig when they were small, but when they went to school full time she knew she either had to get a day job, or put forth the effort to do The Timeless Crane full time. She started searching for information on how to grow her business and came across an ad for The Merriweather Council. (Wee! We love that! The power of the internet brought us together.) She dove into episodes of the podcast and our blog posts.

Signing up for The Council was nearly a no brainer!

Finding success with The Merriweather Council

Debora says that The Council was an easy decision because it pulled so much of what she was looking for about building her handmade business together in one place. It gave her direction and access to a group of people that had experience and knew what they were talking about. She doesn’t have people in person around her that can give that kind of insight. At the start, she was making about 6 sales a year. The Council showed her how to improve her Etsy shop and her website which allowed her to successfully double her prices. (Amazing!)

Deborah is a prime example of the fact that success is more than just the number of orders.

She was propositioned for a project in Dubai to design a light fixture with multi-colored cranes in an Abu Dhabi Mall. The offer came in an inconspicuous Etsy message that asked for a few samples of the cranes in acrylic material. The samples cost over $300 to ship and shipping the entire project would have been $50,000. Instead, she offered to fly out, on their dime, to alleviate that cost. They took her up on that offer and she spent 5 days creating the light fixture. 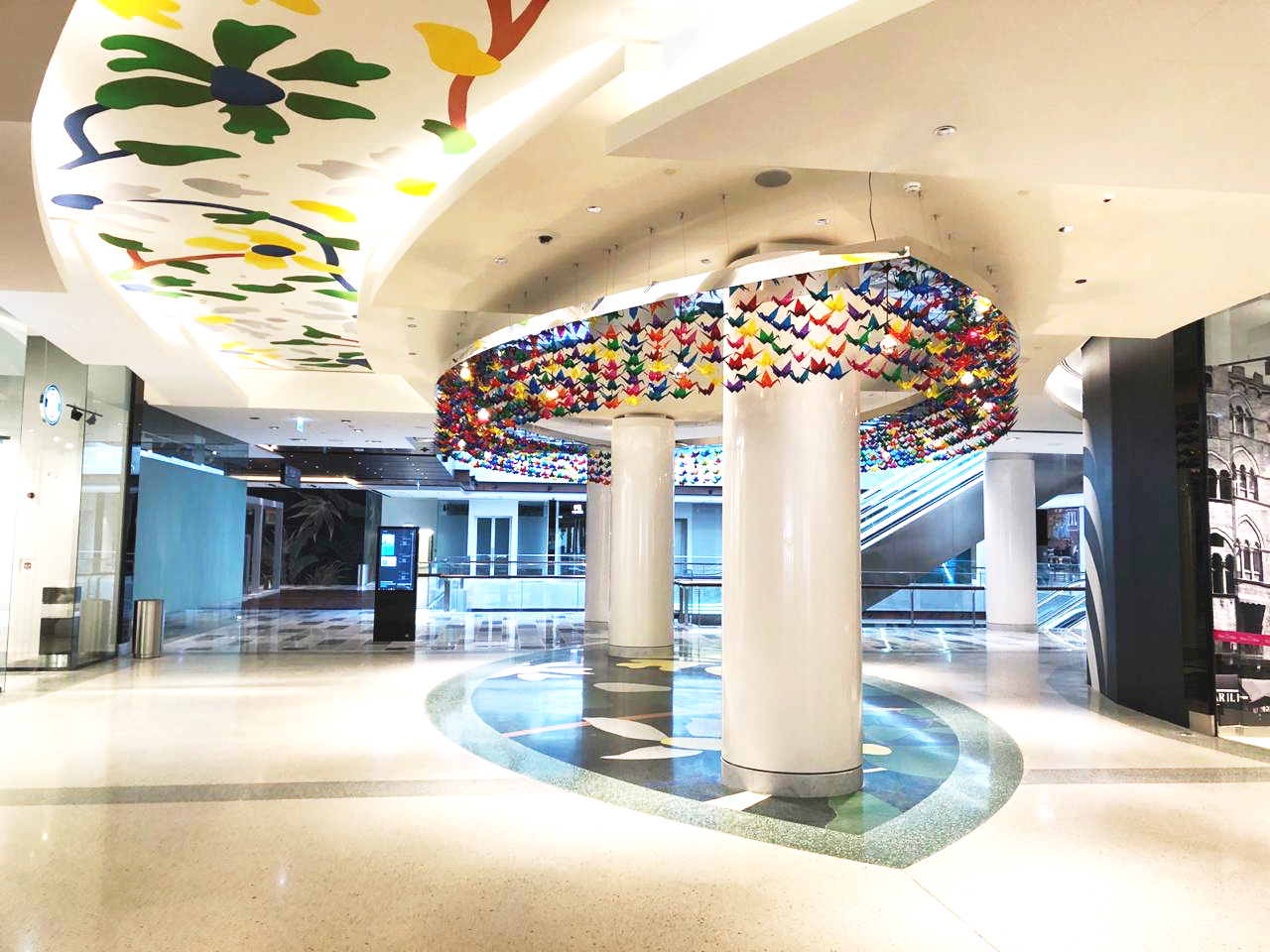 The Council was such a huge part of Deborah’s beginning, and she says she stays because of the community. As we all know, our non-maker friends and family can’t relate and understand the challenges we face as makers in business. Getting perspectives from others who know exactly what you are doing and experiencing is vital to success. Debora told me she loves to share her insights and advice to others who may be just starting – and THAT is a big part of what makes The Council so special

When asked about her biggest turning point, she says there were three.

The first was when she decided she’d rather make mobiles than continue with her medical field career. The second was when she decided to go full time. Last was joining The Council, which allowed her to get on a successful business path. The Abu Dhabi project was just a reward from those turning points. She explains when you decide what you want to do, it opens up so much potential and we fully, wholeheartedly agree!