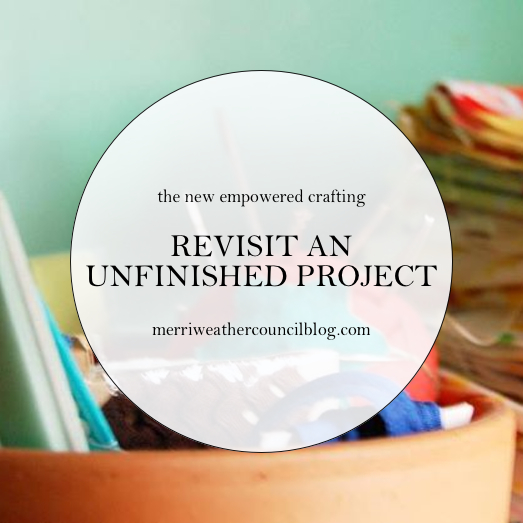 We all have these UFOs – unfinished objects – floating around. If you are like me, you have half a zillion of them. And they are all taking up precious closet space.

They all had so much hope and promise at the start but fizzled before completion for whatever reason.

Bring one out. Just one! You don’t want to overwhelm yourself.

You don’t have to finish it the way it was originally meant to be finished – let’s say it’s a piece of embroidered fabric that was supposed to be a hoop – well now maybe it’s going to be a coin purse. Whatever you think  – do that. Just turn it into something.

You’ll likely feel invigorated by not only the completion of the project, but by the method you used to get there. If it was something new for you, maybe you can use another UFO to make a second and teak it. Maybe at the end of that, you’ll have a brand new product line.

For real, don’t knock it. Some of the best ideas come from mess up moments or reconfigurations. Plus it’s not like you have anything to lose.

Further thoughts: revisiting an unfinished project is a great way to jumpstart creativity  – or overcome a block- when you aren’t sure where to start, because that part is already done. Just pick up where you left off.

Revisiting an old project is a great way to overcome a maker’s block because the hurdle of starting is already conquered.

Do you have a lot of UFOs? What are some ways to repurpose these started pieces or new and creative ways to finish them off?