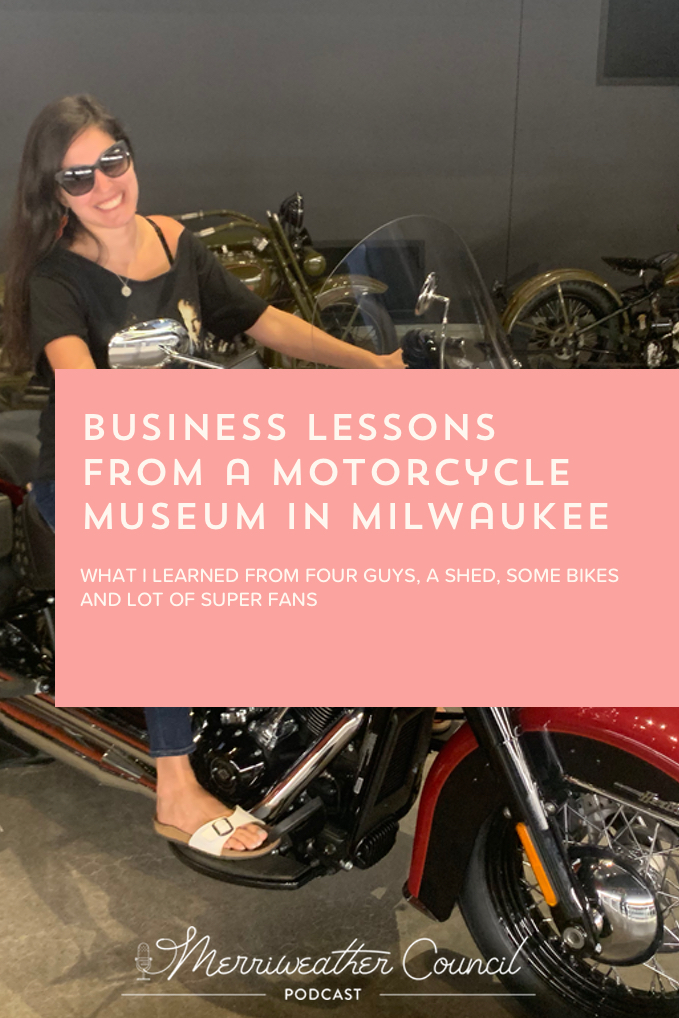 Last fall, while on my national tour d’ BSB, I popped into the Harley-Davidson Museum in Milwaukee, Wisconsin.

I’m not really one for museums, the friend I was traveling with really wanted to go. Truthfully, I really enjoyed myself! As a person who doesn’t care much for motorcycles or museums, I really enjoyed my time at the Harley-Davidson Museum. I wanted to share some of what I saw and learned and experienced there with you because this is basically the story of American entrepreneurship and building a lifestyle brand. I absolutely loved it.

I wasn’t really sure what you expect here but, the Harley-Davidson Museum in Milwaukee is basically a testament to entrepreneurship. Of course, I LOVED that. Hopefully, you will appreciate some of these entrepreneurial anecdotes the same way I did even if you don’t care for motorcycles!

There is, of course, a visual element to this, so pop over to my IG at @merriweatherc and visit my Harley highlight for the snaps I took while in the museum!

On the wall right as you walk in, there is a quote that I absolutely had to document. 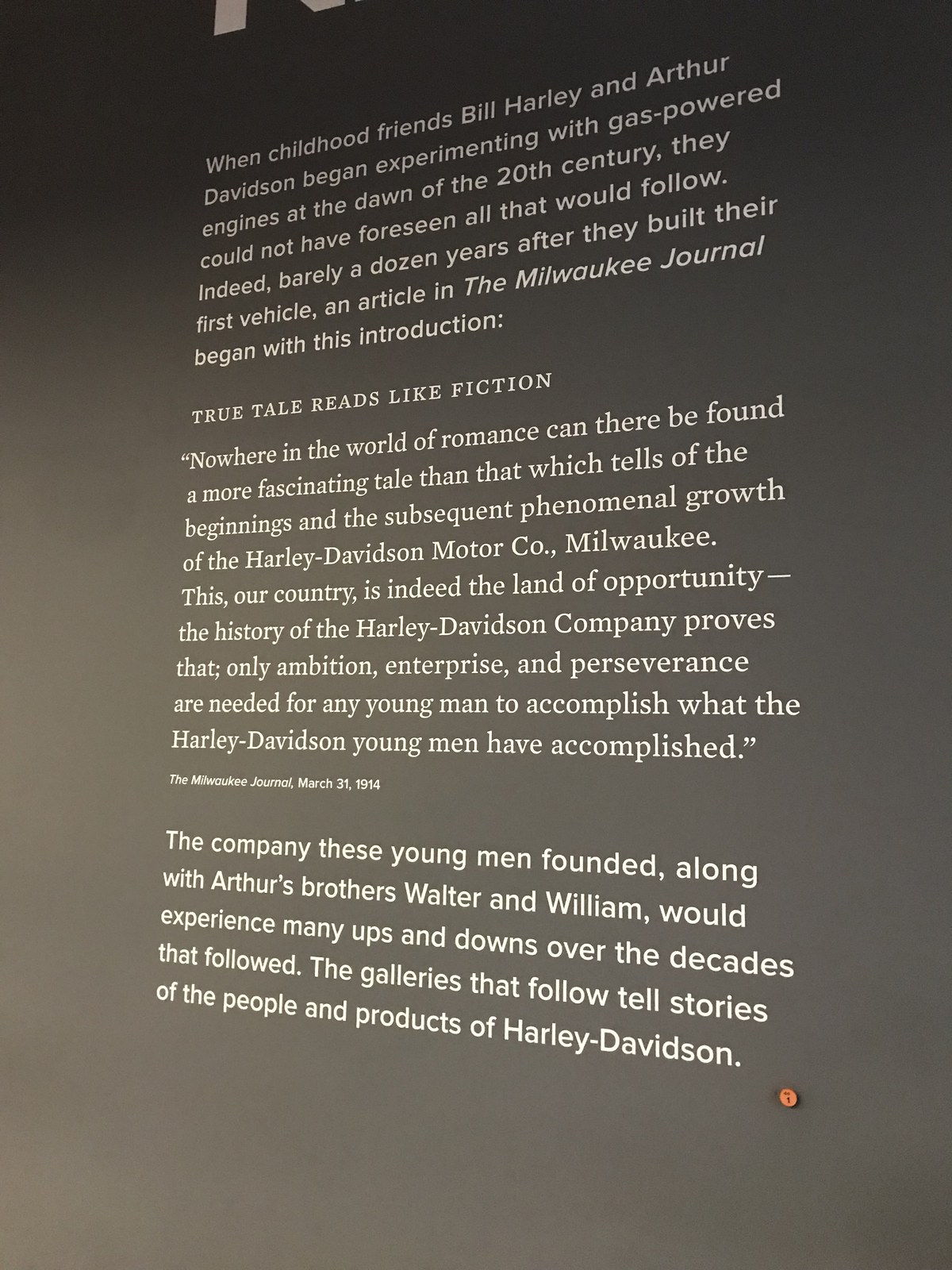 The Harley-Davidson company has obviously spanned quite a bit of history – enduring through the Great Depression, two World Wars and so much more, of course.

The museum is laid out as a timeline so you can see the growth and development of this lifestyle brand up through today. As you walk through it, they have little placards marking the years and they have bikes on display from several of these years.

I particularly liked what they had on display for 1933. 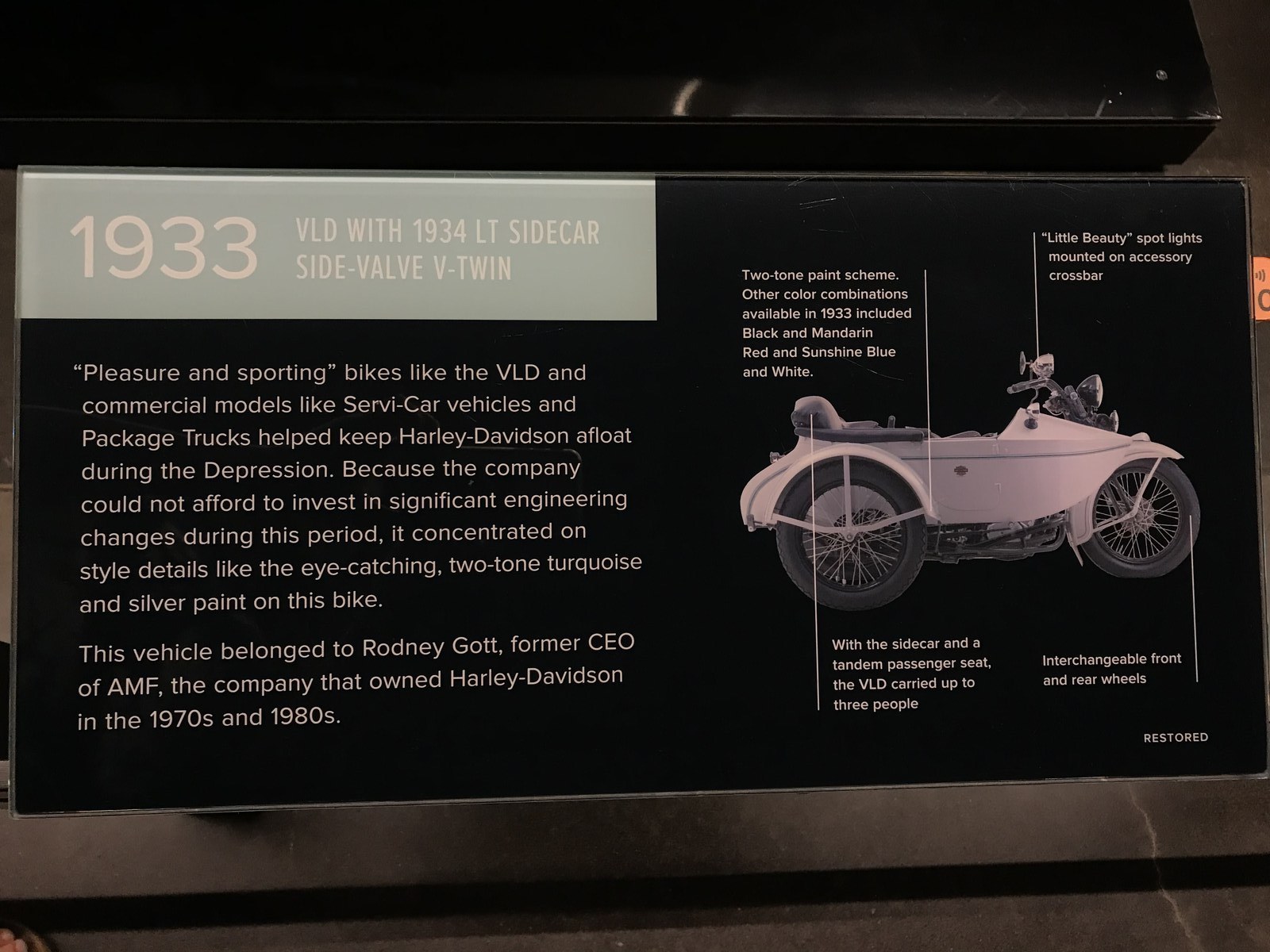 This really highlighted creativity over money and the fact that they couldn’t invest in big engineering changes so they focused on the creative elements. This is what “kept them afloat!” Creativity kept them afloat. Are we all having the feels about this?!

As any good business would do, H-D took a lot of risks in their time and those risks are documented even if they were complete failures. For example, the Harley-Davidson bicycle.
As you likely know, we do not have H-D bicycles, because it didn’t work out.

They had a strong process behind the bicycle. They wanted people to get familiar with the brand on a regular bike and then evolve into being motorbike people. It makes sense. They saw the regular bike as a “link in the chain” to getting people on motorbikes. But, “despite heavy promotion” of the bike, “sales were disappointing and production was discontinued in 1923.” They started announcing the bike in 1920 – so for three years, they tried it! Three years!!

Another thing I really loved about this museum was it highlighted a lot of their outreach and effort to make H-D a household name, a lifestyle brand. They were educating their salespeople on how to sell – they knew there was a certain amount of education that people need in order to even give this product a thought. A reminder: sometimes you have to educate people on the value of your product. It’s not always just inherently understood! Especially for these luxury products that aren’t essential.

There were a few great examples of how H-D marketed their product as THE solution to big problems. In one instance, they had police in their ads saying ‘solve your parking problems with survi cars! Fast mobile and efficient the servi-car officer could make them obey!” This was a 1929 ad campaign suggesting that officers on Harleys were THE solution to the growing problem of traffic violations.

H-D Motor Company demonstrated proactiveness in a number of places throughout history. One instance I really enjoyed reading about was the post-war sales projection made by Arthur Davidson. In 1944 Arthur Davidson said, “reconversion to civilian output is not likely to be too difficult.” He predicted that post-war sales would be great because soldiers were going to come home and already be familiar with using the product. He predicted they would BUY their own motorcycles – both new and used. He knew they wouldn’t have to educate these prospects and that the fact they were already product- aware and familiar was a huge asset. He was right.

The very last part you encounter in the museum is an ode to the fandom, basically. This area is quite large and features hundreds of photos and video clips of people on their bikes, talking about where they ride, why they ride, what they love about Harley… Basically it is a big room full of user-generated content. I absolutely love that! I love that they took all the space and dedicated it to their fans and supporters and the people who really build the brand. This area also featured collector items and personal items from brand enthusiasts. 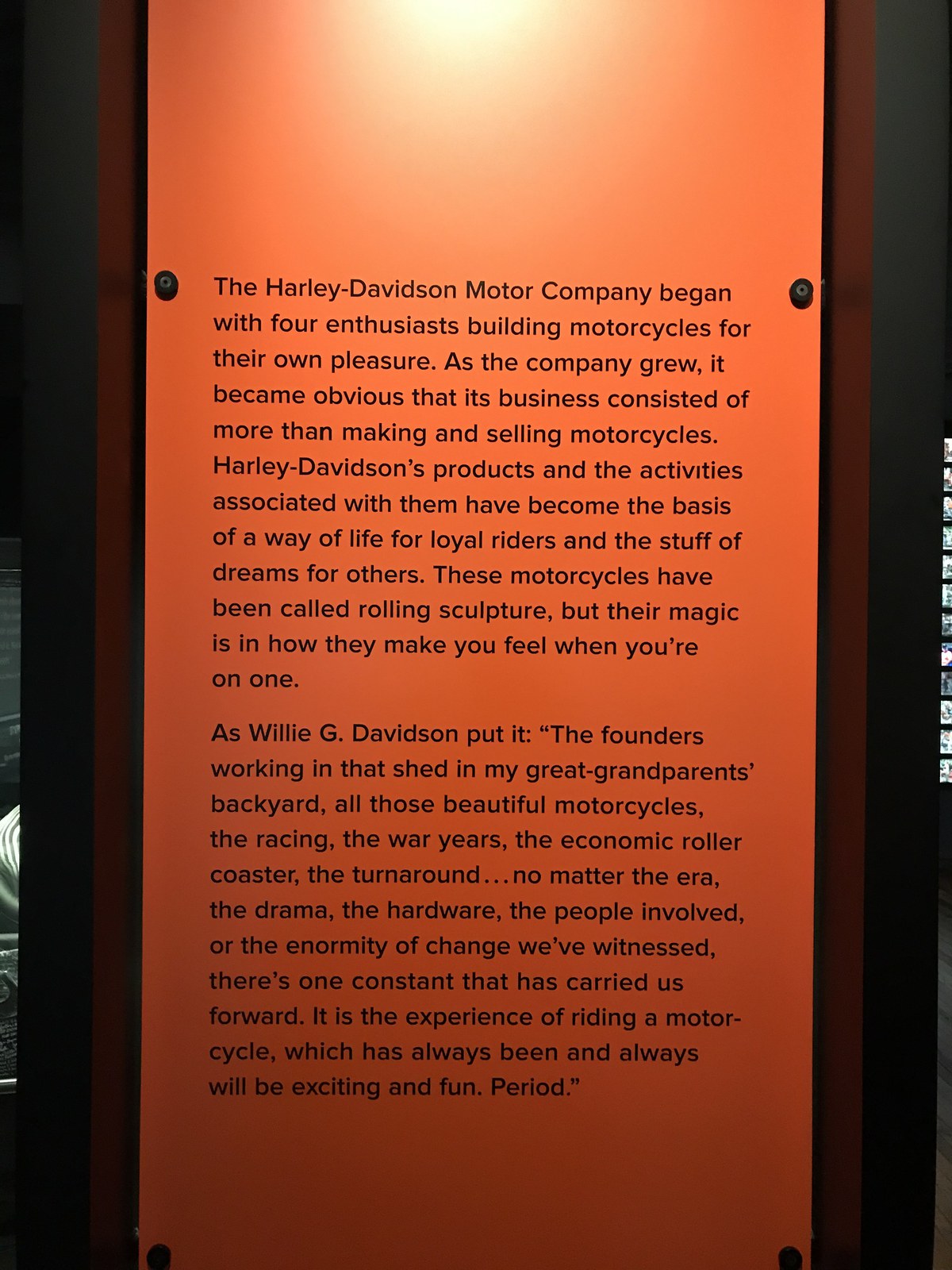 For me, this really drives home the idea that people do not just buy a product they buy a lifestyle.

There is a LOT to learn from the truly inspiring story and rise of this company. Harley-Davidson built a product and refined it over the years but they also nurtured this community of enthusiastic bikes and brand loyalists. They pivoted and innovated when current times required it throughout history and they grew into an internationally recognized lifestyle brand. They pivoted throughout history and will continue to do so. I hope you appreciated this example of entrepreneurship as much as I did! Such an epic story. 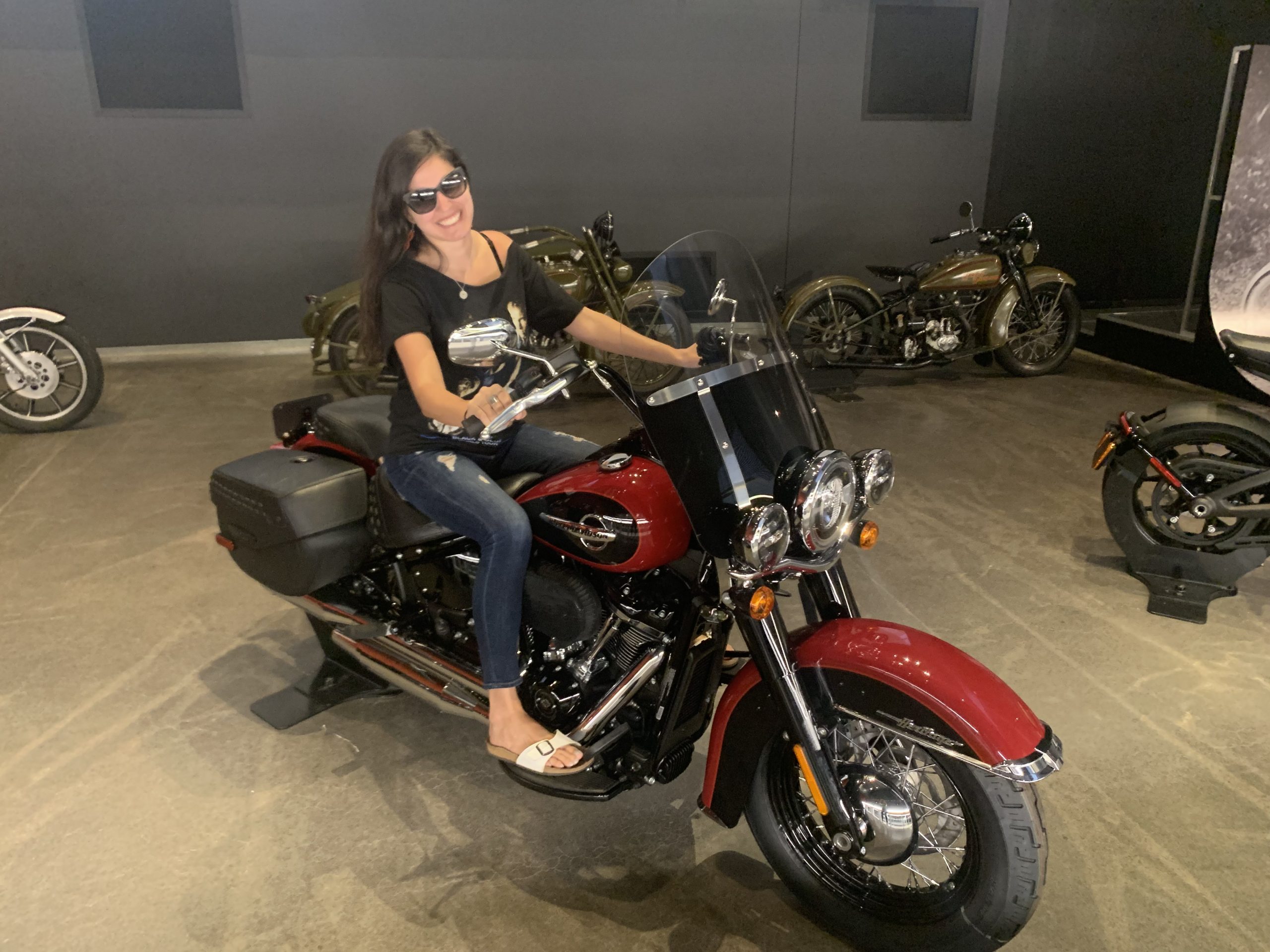