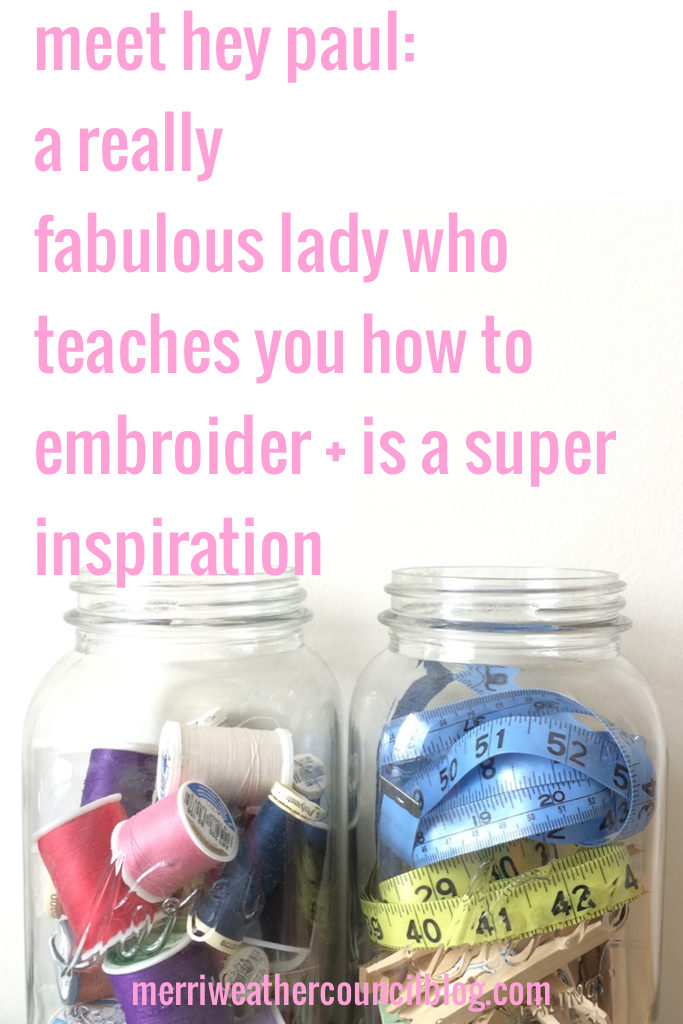 If you like crafts – specifically embroidery – and you don’t know Kristen Shuler of Hey Paul Studios, you might need to crawl out from under your boulder and into the light!! Kristen is a superstar in the embroidery world and I am so excited to share more about her here today with you!

This is a big week for Kristen because she is celebrating 1 year of Eat Drink Stitch (embroidery happy hour, yes please) and she was the guest of honor on the She Percolates podcast! Seriously awesome stuff.

Of course, there is a history here and I asked Kristen to tell me a bit about how she got into this whole thing in the first place, because I always am intrigued by that. I like to hear the stories, you know?

“I started doing embroidery as a way to debrief at the end of a long day of work day. I was pretty hooked on it instantly. Most of my designs were based on anatomical charts and diagrams, largely influenced by my work as a Medical Social Worker. I began selling my pieces through Etsy and showing locally, primarily to other medical professionals.”

Seriously, if you haven’t even seen an embroidered ameba, have you actually ever lived? I’m not sure.

In addition to being a bad ass embroidery artist, Kristen is also a roller derby queen. Sweet sushi juice, I wish I could be one fraction of this level of cool.

“A couple of years into my stitching career, I was injured during roller derby practice and had to have surgery on my stitching arm. I was out of commission (skating and stitching) for several months and it was devastating. I started hanging out with a group of other injured derby gals to get some support. They were a very artistic and crafty group. I showed them a few stitches and embroidery mania kind of started to spread through the derby league. It was my first experience of seeing how embroidery really could bring people together in a social setting. There were several girls on the league who I never really tried to bond with while on the rink but once they started stitching it was like the ice was broken and we realized that we had SO much in common. “ 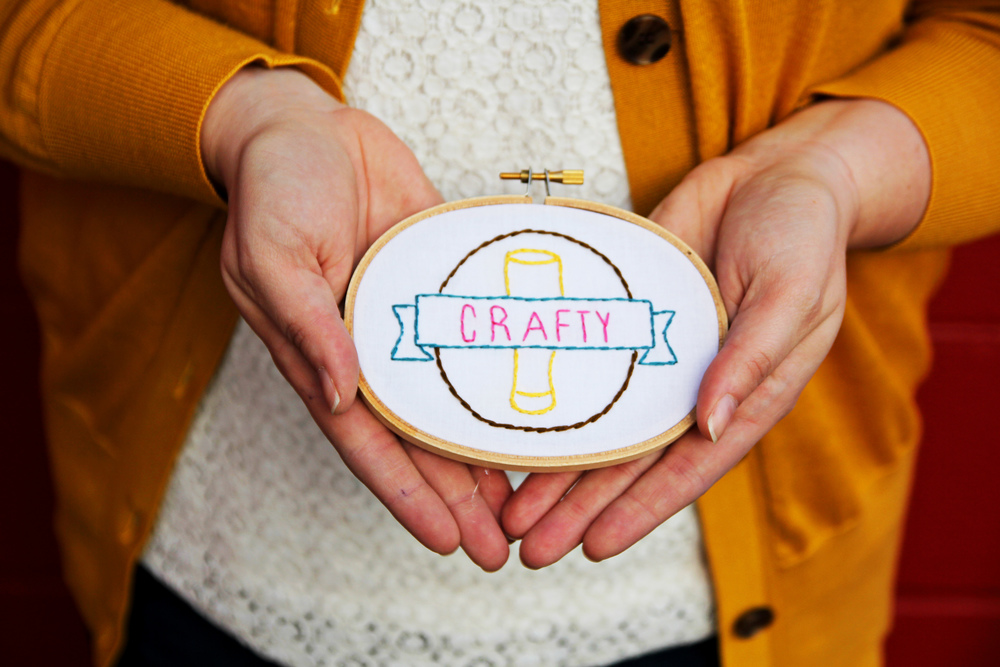 Umm, awesome? So awesome. See what happens when crafty folks gather? Seriously amazing things. Because Kristen is now teaching people all over her city to stitch. Not only that, there is booze included. I’m sorry, but that sounds like my kind of night out.

I’ll let her tell the rest of the story…

“A few months post-surgery, I went to DC for a conference related to my day job. I ended up attending a Handi Hour session at the Renwick Gallery. It was glorious. It was a huge room filled with 300 or so attendees. Men, women, suits, ties, street clothes, you name it. All kinds of people were there. Jenny Hart had a piece on display so the craft of the month was hoop art. The premise was that you purchased a ticket that got you two craft beers and a craft project. There was very little instruction and it was super laid back. I spoke with some of the people who were in charge of the event and they encouraged me to take it back to the Nelson-Atkins Museum in Kansas City to try to get something similar started. Being a Social Worker, I’m kind of “team-worked out” by the end of the day and prefer to do most Hey Paul stuff solo so I skipped the partnership and just decided to try to do something on my own, on a smaller scale. It took me two years of getting the courage up but I finally started contacting bar and restaurant owners and getting events scheduled. It’s a TON of work and I’ve had to stop making and selling art of my own in order to manage the project but I can’t even begin to explain how much more rewarding it has been. I’ve had people that have made some very strong friendships through the events; women who have quit smoking or lost weight since learning to stitch; and others (me included) who have really overcome some serious social anxieties through the events.

I’m in a stage now where I want to make sure that I’m growing responsibly and can sustain. I am pulling a small focus group together to get an idea of what people love about the events and to do some brainstorming on potential changes. I’m looking at ways to help to expand my brand (which is still evolving) into other cities.

Kristen is on a mission to teach people how to stitch and that includes people not in her city. Follow her on instagram @heypaul to learn + get more info!

Get all the thread on EDS and Hey Paul here. Also, check out this fabulous episode of She Percolates featuring Kristen. 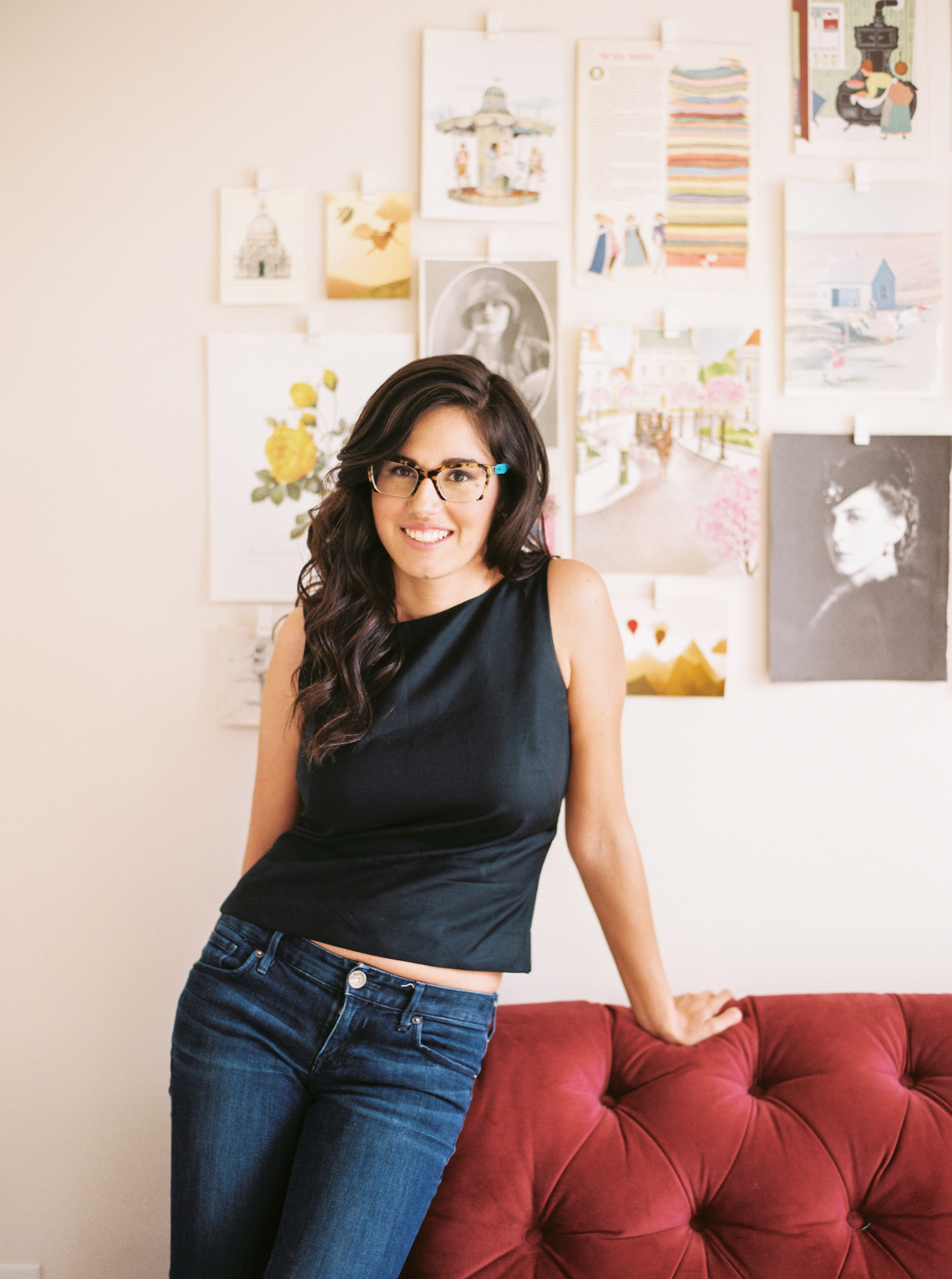