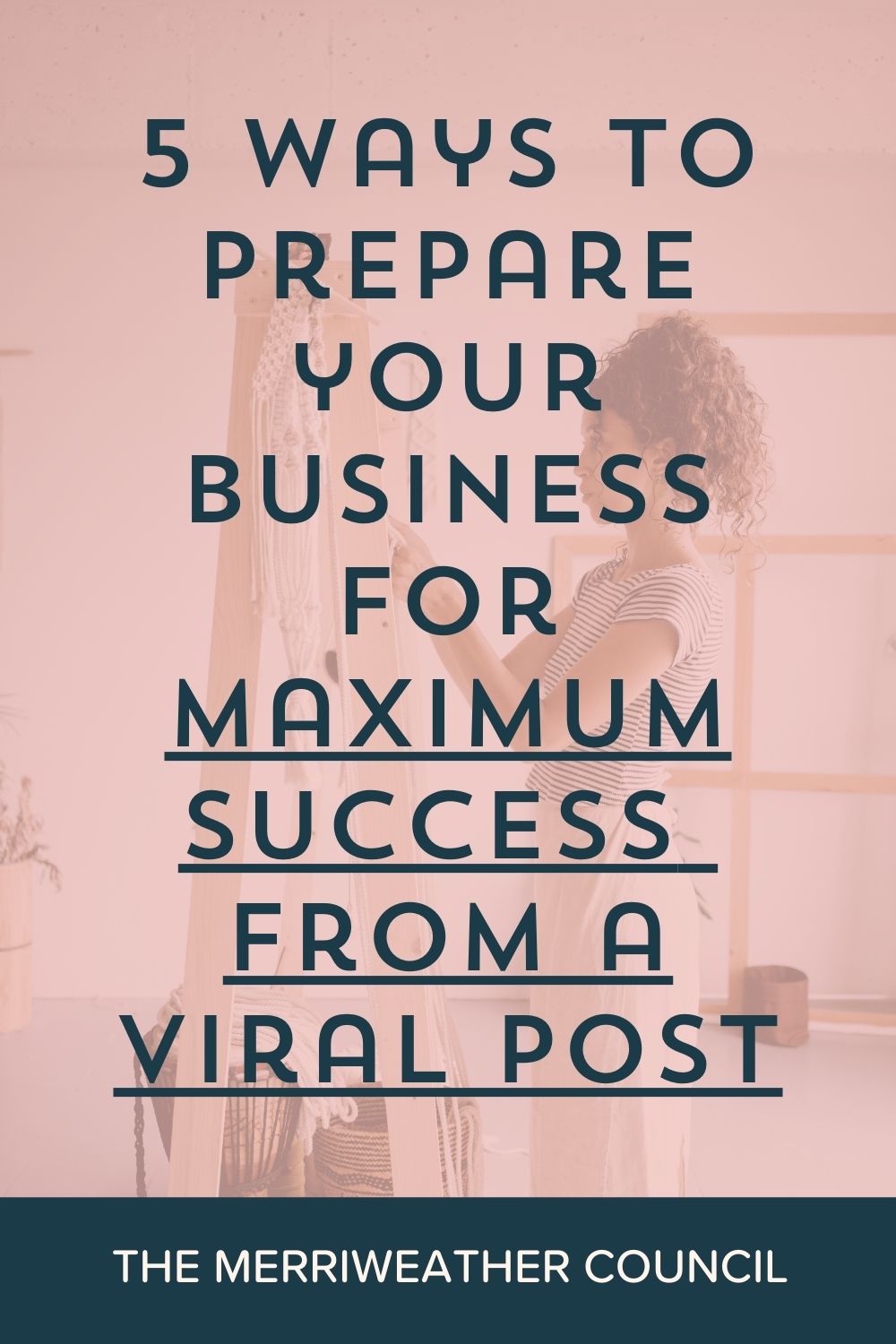 If your product became a viral post tomorrow, would you be ready?

Small business owners are so lucky to have an abundance of tools at our disposal for creating and sharing content right now, such as Youtube, Instagram, and TikTok. I know that can be overwhelming at times, but it is a good thing overall.

There are so many ways to create content and places to publish that content. Content is being consumed more than ever. It’s probably ‘easier ‘ than it has ever been to go viral.

What does “going viral” mean?

According to my research, the phrase “going viral” (related to content) was first used in 2009 to describe the ‘David After Dentist’ video.

I could not find any universal parameters that would classify a piece of content as ‘going viral.’ There are quite a few different ways to “define” something as having ‘gone viral.’

In the past, I have heard that something is considered viral if 10x your follower count likes it, so if you have ten followers, but your post gets 100 likes, you’ve gone viral by that definition.

I saw other definitions stating that the view count should be anywhere from 100 thousand to 5 million. Quite the range there! There was no one answer to how to define something as viral content.

For this episode, though, “viral” just means you are getting a lot more attention than you usually average or anticipated, rather quickly.

Using any of these definitions and considering the tools we have available, a viral post might be more likely than ever.

When I say ‘easy,’ I mean that there is a lot of opportunity, and there are many places for that to happen. It’s becoming more and more possible for content creators, especially makers of products, to go viral on their own! You don’t have to wait for Oprah to handpick your product for her favorite things feature! You could literally post on TikTok and go viral with no other party involved. It CAN be that simple.

Why being prepared is important after going viral

Being prepared so that you can manage the aftermath and result of going viral is vital!!

Going viral can be fantastic for your business! It can create a lot of visibility and increase your sales short or long term and help your business grow! A viral post can lead to even more new opportunities! It can connect you to more of your ideal customers.

A post going viral does what you want or expect any organic social posting to do but on a much larger scale, usually in a short period.

If you post with the desire to generate a few sales from your average social post, or if you expect to have a few trolls every once in a while, then going viral will amplify that! When a post goes viral, you can expect to see exponentially more of the good and the bad.

Whether you are trying to go viral or not, you want to be able to handle it if you do, in fact, find yourself in a place where your product has suddenly blown up overnight.

It is important to remember that, as business owners, the closest we can get to being ‘in control’ is to be proactive.

If you have a post that is going absolutely viral, it’s unlikely you will step in and delete it or do anything to hinder the reach that post is getting. You are going to want to let that ride and see what happens. You also want to be prepared for it!

The first step to being prepared is understanding that this CAN happen. Going viral IS possible. Again, probably more possible than it has ever been!! It can happen to you, even if you aren’t trying. Let’s just be clear about that.

Whether you’re going viral because a big entity like Oprah has mentioned your product or because you created a post that picked up steam organically, a massive increase in traffic and interactions without warning can be stressful.  Being proactive will help you to maximize the exposure for as much good as possible.

There are definitely some downsides to going viral, but you can at least eliminate a couple and reduce the impact of others by having certain things in place, and THAT is being proactive.

How to prepare for going viral

Here are five things you want to put in place now so that if something extraordinary comes up out of nowhere, you are As prepared for it as possible!

Doing the things on this list now will also help mitigate any self-loathing over decisions past-you could have made but didn’t think of.

First, be sure to always send all of your organic traffic to a site you can collect emails through.

You can always update your bio link if something starts to take off on your account, but sending your social traffic to a site you can collect emails on is good practice to get into now.

There are a few reasons for this!

If your product sells out before your traffic dies down, you’ll want to be able to capture those leads so you can stay in touch with them once you restock. (Smart!)

On the other hand, there might be people who love what you do but either can’t or don’t need to buy right now. Give them a way to connect with you and stay in touch beyond social media. (Email is your best bet for that!)

People do look for that, by the way. I know that surprises people sometimes but yes, there are shoppers who want to get emails from you. You want to get those email addresses while traffic is flowing to your site.

If you sell on your own branded e-commerce site, you should be able to implement an email opt-in pretty quickly today! Do it today! Do it before you send any more traffic to your shop. Remember, going viral just amplifies things; you should want to collect emails on your site even if you get five visitors a day. It can be simple, but it needs to exist. You always should be capturing emails from the people who land on your site, and you want this set up before you start getting massive amounts of traffic! It would suck to go viral and get a lot of traffic to your website and NOT have this in place, wouldn’t it?

Get your prices right

Second, get your prices right.

There is nothing quite like order-overwhelm to make you realize you didn’t charge enough. Make sure your prices are what they should be NOW, not as you are suffering through a three-month backlog of items priced way too low. We can help you get this sorted! Here are our best pricing resources, including a free class!

Viral pots reach ideal customers, nonideal customers, trolls, and people who have media power. A viral post could get the attention of a publisher, editor, influencer, or celebrity who wants to work with you. Make it easy for this person to email you directly. Having a contact form is not enough; they fail regularly. Put your email address on your about page!

Be sure you are authentic to your brand in everything you do.

Be sure that everything you post is authentic to your brand and what you want to be known for. It’s going to suck big time to have popularity based on something that isn’t you and that you can’t maintain. Right? Whoever you are and whatever you do  – – the way YOU do it is your edge. Keep it sharp and let people see it.

Make sure your platform can handle increased traffic

Make sure you could handle high traffic.

Make sure the platform you sell on can handle high traffic. Even though we strongly discourage you from sending organic social traffic to Etsy if you can help it, your Etsy shop can handle the traffic from a viral post. A Shopify site can, too. If you sell on a WordPress-based site, you will want to check your hosting plan!

This is a short list, but every single thing on this list is important now, especially if your product or shop pops off suddenly.

You shouldn’t be creating content just with the hope it will go viral. You should create content to connect to your ideal customers, even if that is on a small (reasonable) scale most of the time. Going viral is NOT the goal, but it is something that very well could happen. Going viral can crush your business if you haven’t adequately prepared for the impact, so what good is that?

Another important reminder: your business can be successful without ever going viral! All of the things mentioned here will help you regardless.  These can all benefit your business even if you never see a piece of your content go viral.

Thanks so much for listening today! Remember if you love The Merriweather Council Podcast and you are comfortable with PDA, leave us a positive review on Apple! Share this episode with a maker friend and follow us on Instagram @merriweatherc for more!