The Evolution and Varied Locations of Merriweather HQ

The past few days I have been trying to go through photos and sift through things on my computer in an effort to “spring clean” and purge some stuff that is taking up room. I’ve had this computer for 3 years so this is around the time I start to worry about my gadgets haha.

In my efforts, I stumbled upon lots of photos from yesteryear – of the various iterations of Merriweather Studios! I thought it would be fun to take a look back and reflect on how far, or in some cases not-so-far, I’ve come!

My very first “studio” space was in the bay window area of my living room in my one bedroom apartment in Boston! I was a wee lassie then, so fresh and young! So innocent and bushy tailed…. etc… 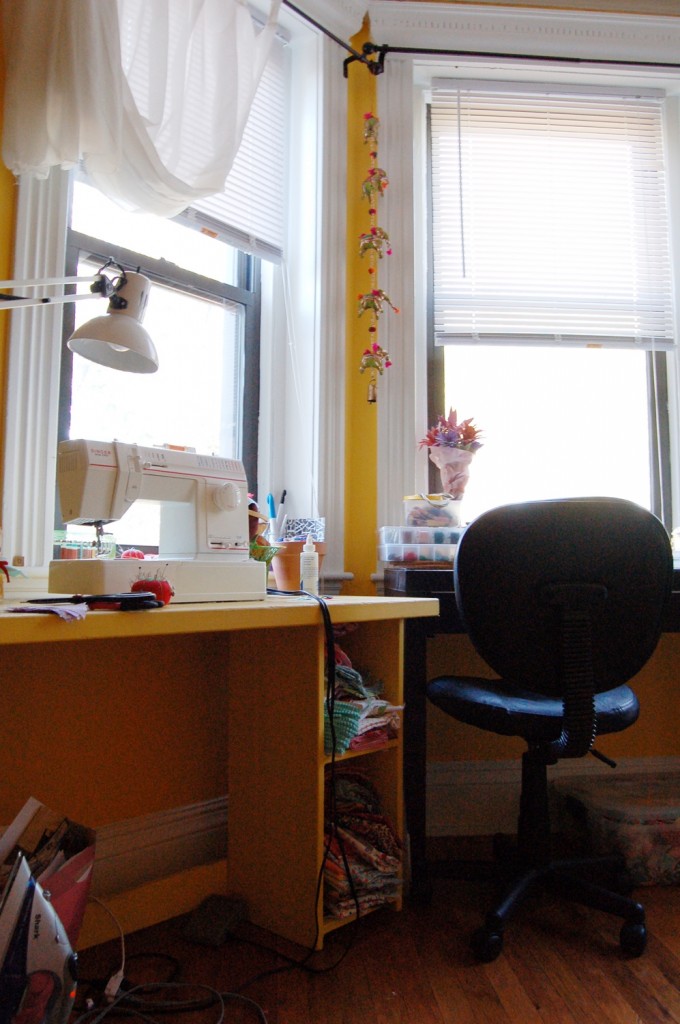 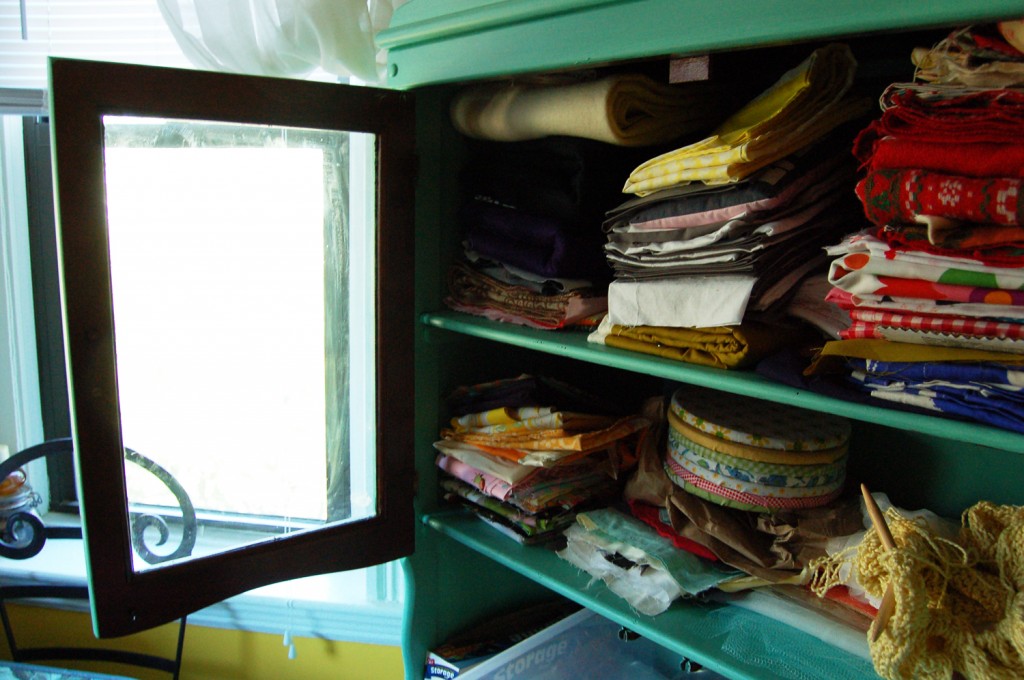 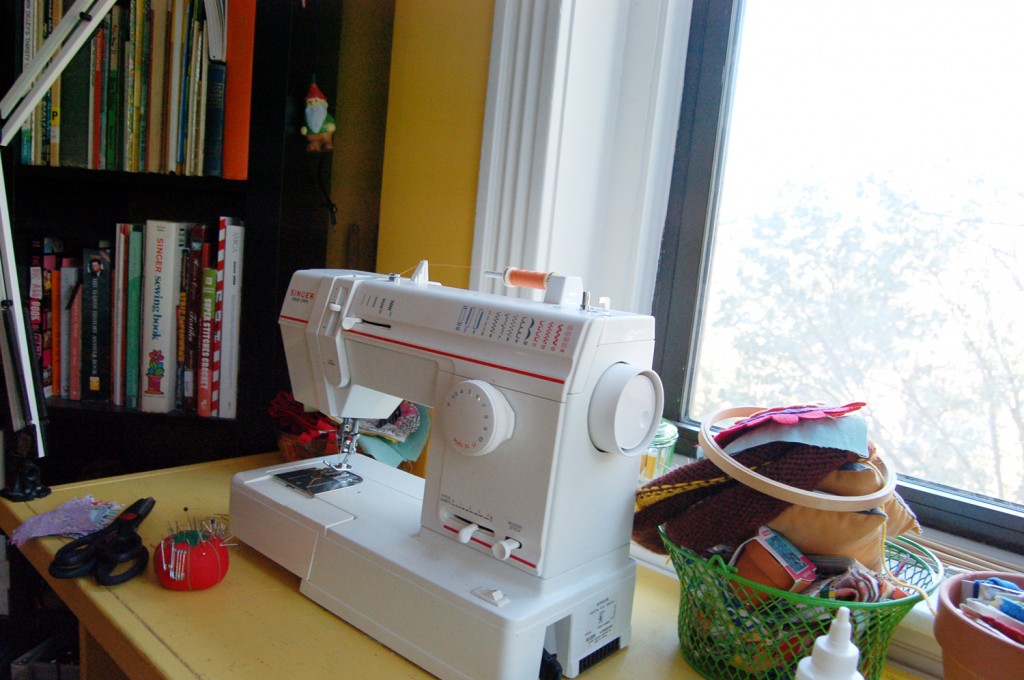 This “studio” was two desks, a sewing machine, and a cabinet full of fabric. Of course it overflowed and took over the entire living room but, that’s the beautiful thing about solo-living. If it didn’t bother me, it didn’t bother anybody!

Iron on the floor, bad lighting, barely any space to lay things out, no storage. Oh it was a humble start!!

This is where I really grew into myself. If that makes any sense. It took me a year to even get this rolling chair, and I got it from some dude on craigslist for $10. Because I was a frugal little thing. Still am. But It was a very awkward space and eventually I gained the clarity. This is also when I was covered in threads 100% of the time. And STARVING 80% of the time… because all I did, LITERALLY, was work. And I forgot to eat… many many times. Those days are over.

Once this got to be impossibly annoying, I had what Oprah might call an “aha moment” – I only am in my bedroom at night, and I am in my studio all day! Why not make my bedroom a studio and move my bed into the living room!? It’s not like anyone is coming over here – because if they did they’d be sitting on something work related. Can’t have that.

So that’s what I did. And my studio room was born. It was probably the best set up I’ve had since, honestly. And I’ll explain more about why in a bit. And it’s sad because I couldn’t find any photos of this room in it’s entirety actually. Only sweet memories… 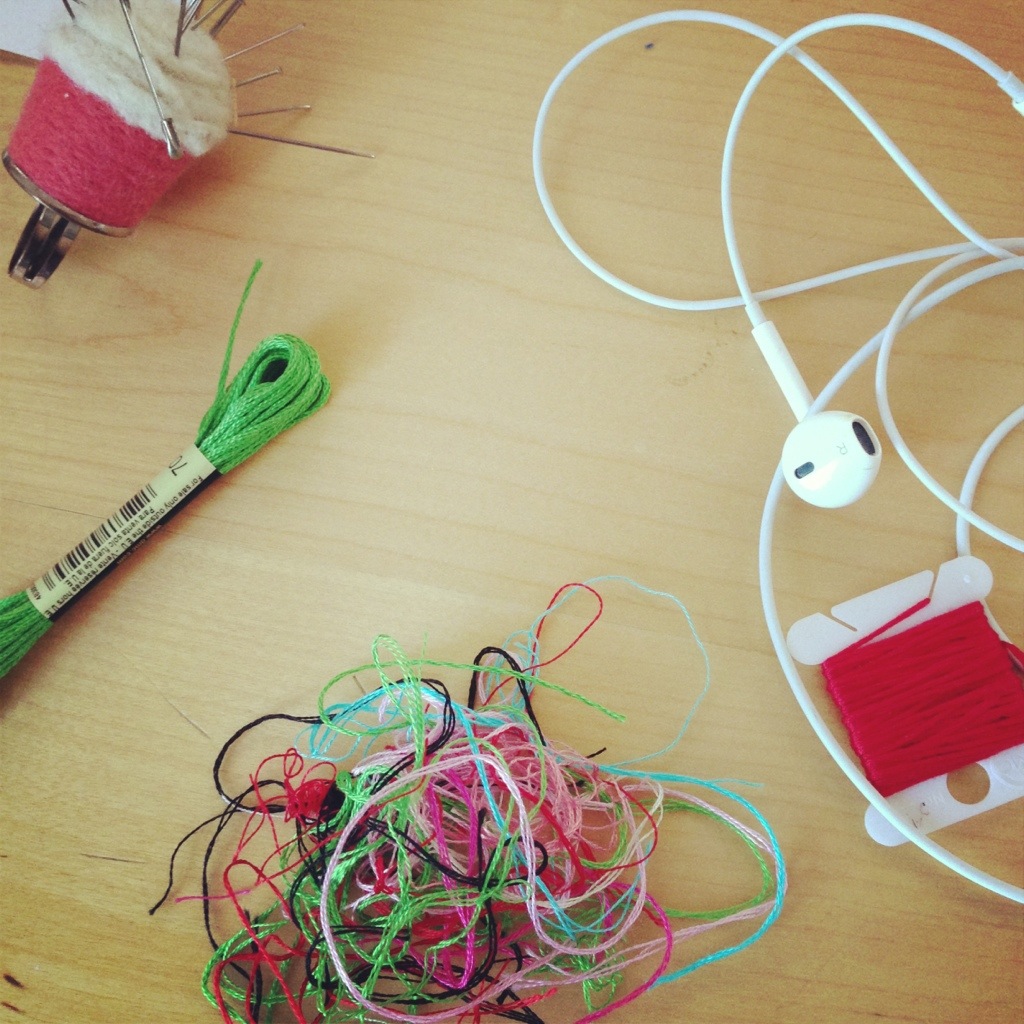 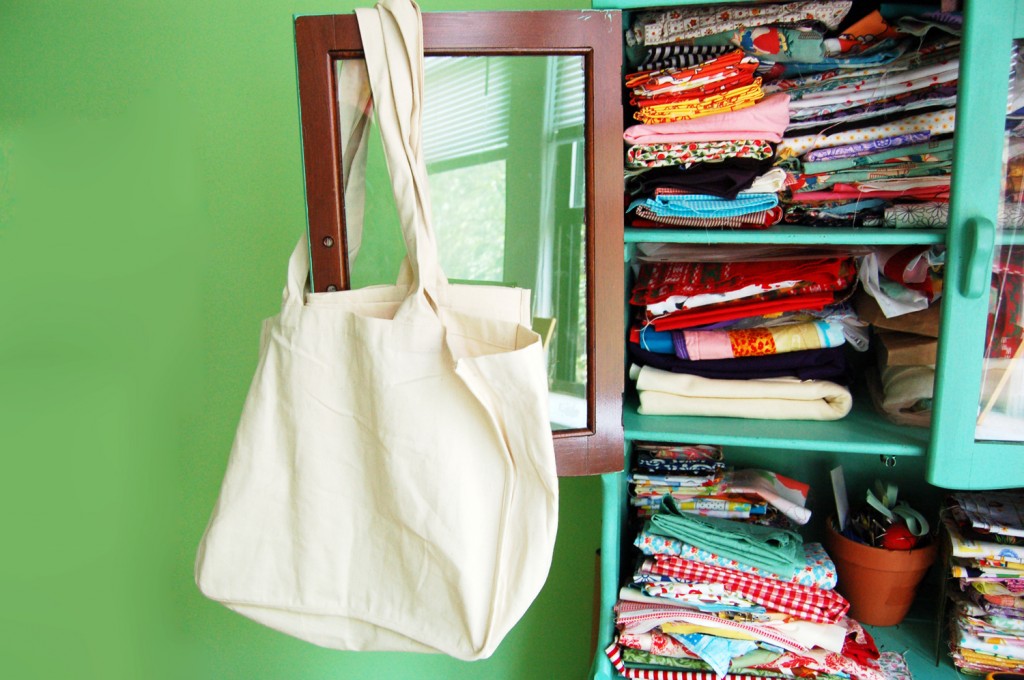 I don’t know if you’ve ever been to RI but it’s a strange little place and I basically hated it there very much!

There was one wonderful thing about living in Providence, and that was my friend Amanda. I swear I would’ve shriveled up and died a lonely, miserable blob if not for her. 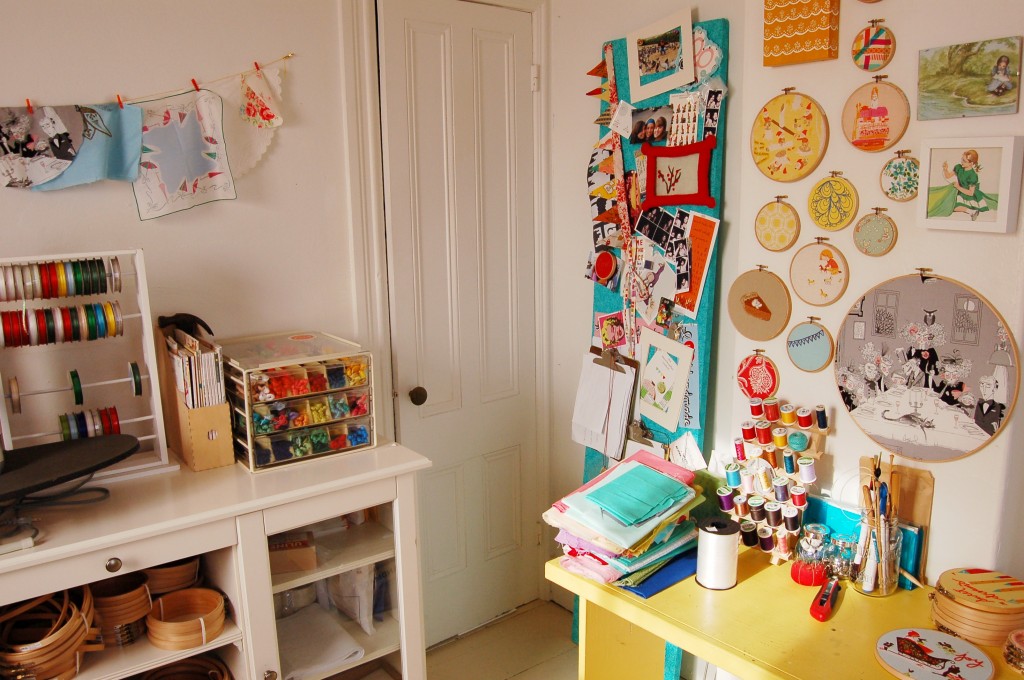 I did have a nice studio space there that was contained to one well lit room, and it even had a small closet! I was moving up in the world in that way! I also had a rainbow-organized hoop display. It was a lovely addition to an otherwise miserable experience. haha… you think I’m joking. 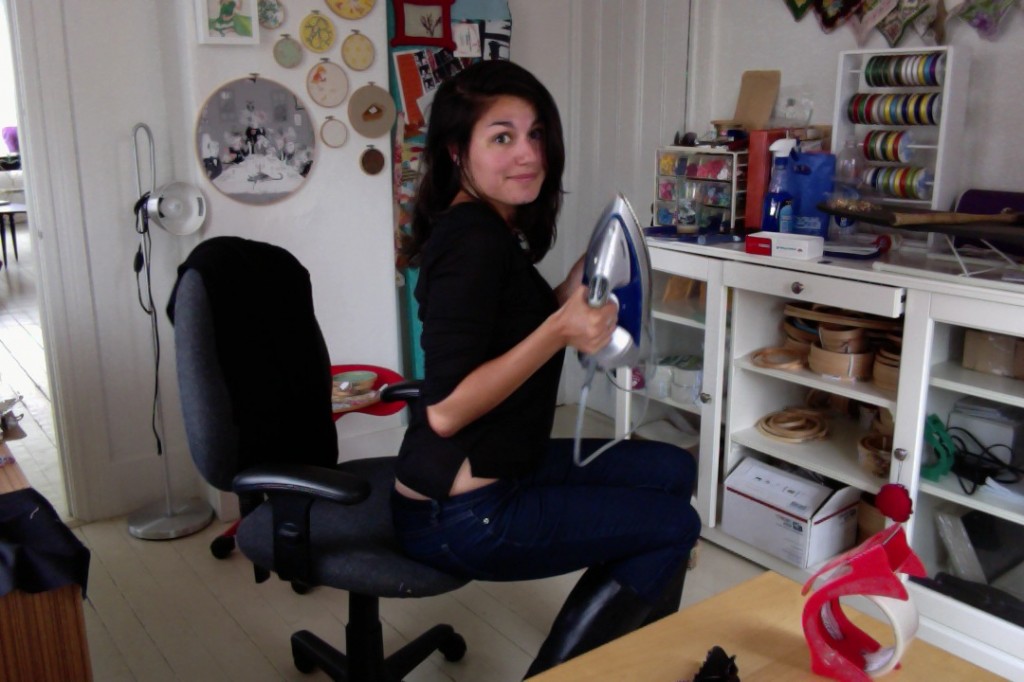 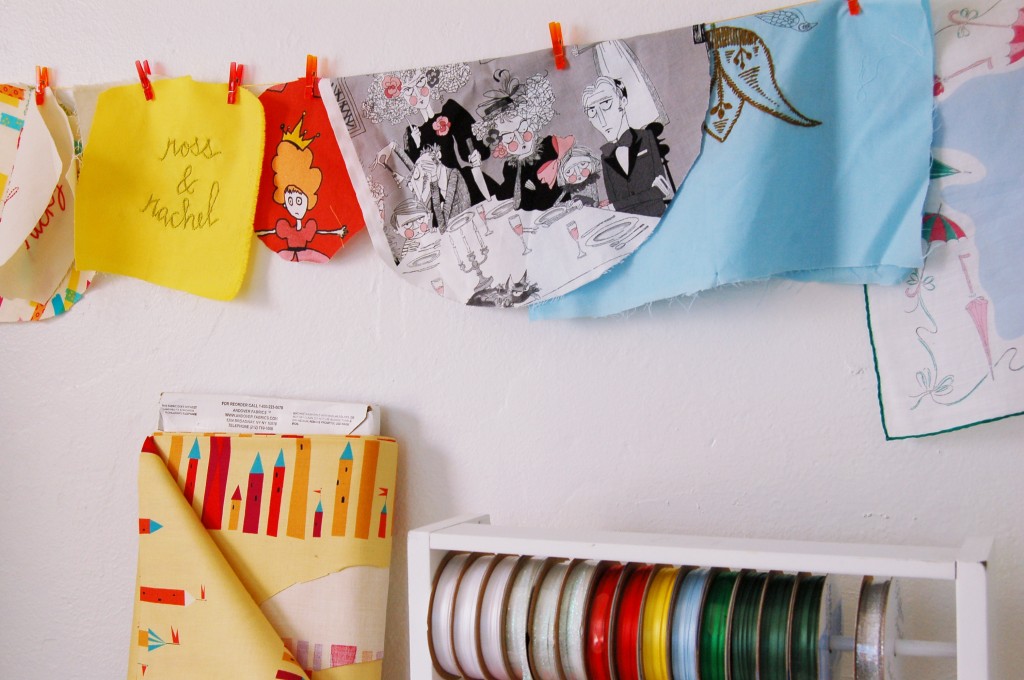 This is the studio I was in when Merriweather Council was featured shop on Etsy, so we have some fond memories. But after RISD graduation, we hightailed it right on back to Boston and back to my one bedroom apartment in the sky.

Which was great, obviously. But now it was not just me and Merriweather, it was me, FIANCE, and merriweather. So, Merriweather Moved back to the living room, but this time it was a bit different.

My dad installed a bigger desk and some cabinets for me and we scrunched our living space into a tiny little nugget and mostly our apartment was Merriweather over here and Bedroom over there and that’s about it. It was tight, but it was temporary and we made it work for about 8 months before we moved down to Virginia!

I wasn’t able to dig up any decent photos of this Third Generation Boston Apartment Studio – which was on the OTHER side of the living room of the bay windows – and thus, darker – because the lighting was absolutely horrible. My computer was in a closet for real. It worked, but it was not the greatest set up.

Now, everyone knows I have been greatly enjoying my time in VA! I really like it here and we have a very nice apartment and I have a very nice room for my studio! My only issue with this space is that it’s lacking the space for a HUGE worktable which is my ultimate life goal. One gigantic work table that can be accessed from all four sides. And then a computer nook. That would be ideal. But this works too! 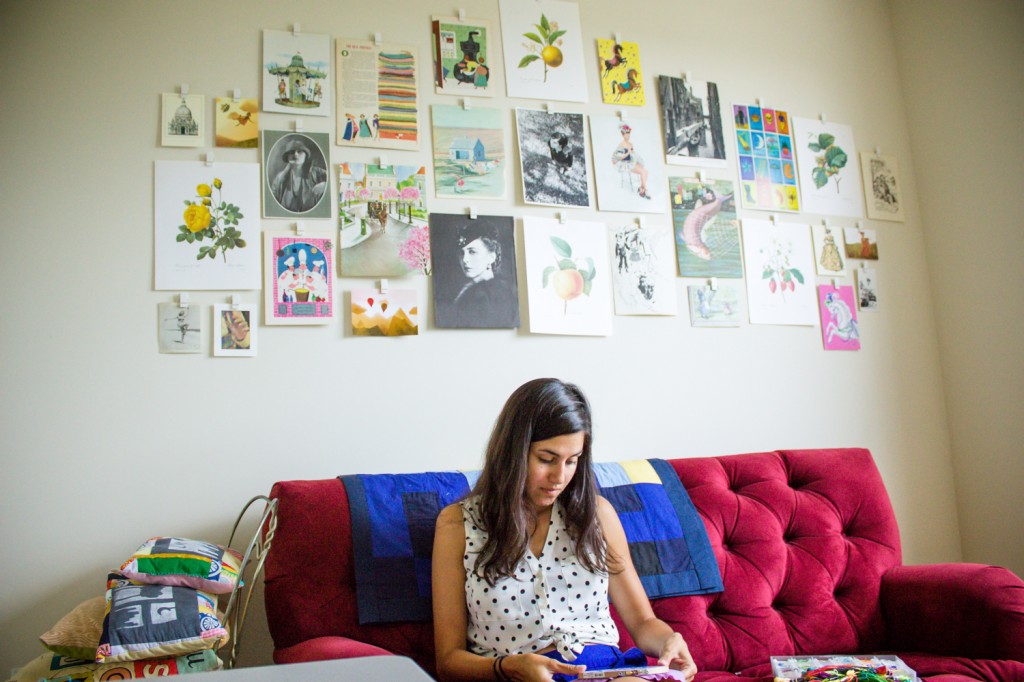 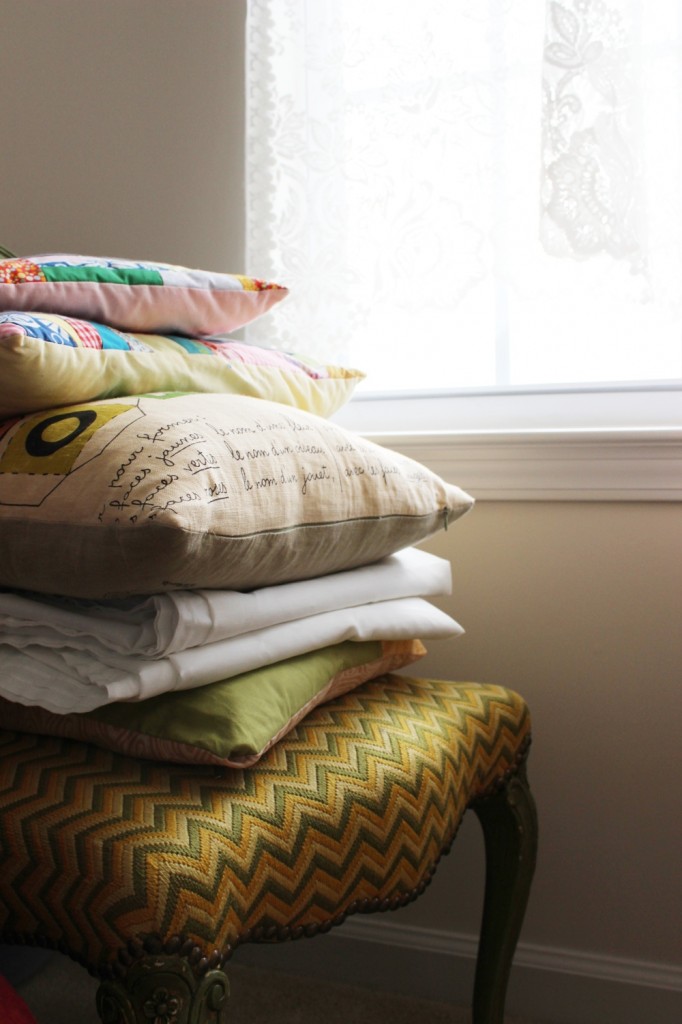 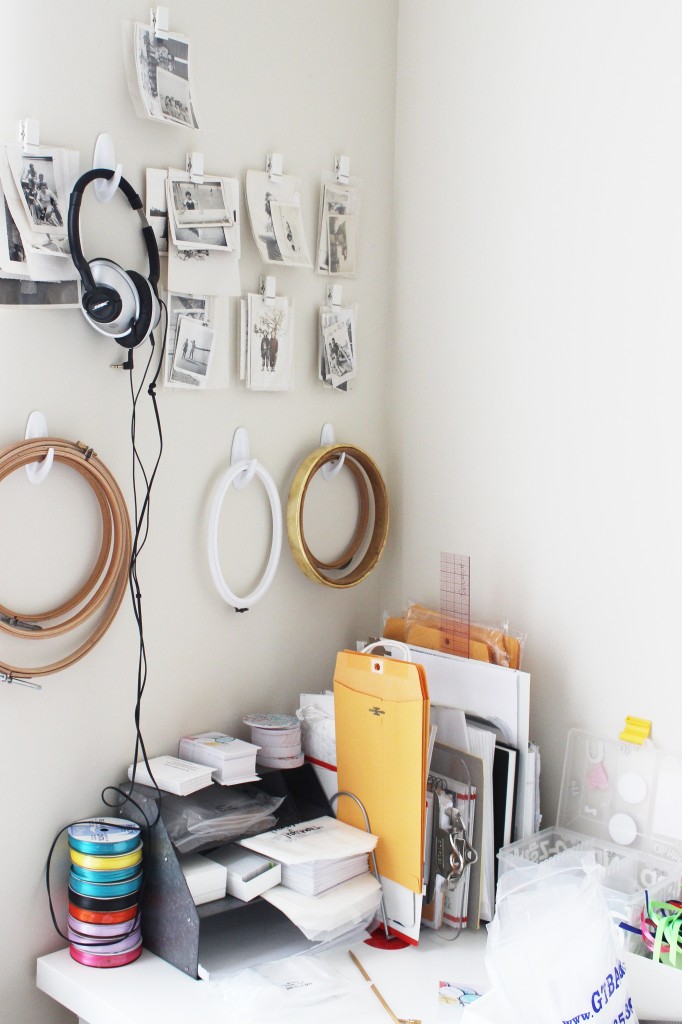 And of course I love my gallery / collage wall and my couch! I love my couch so much. It’s the cutest darn thing there is. Except for my dog.

You can see, presently, I’ve gotten a bit more organized. Kind of. Oh and I always remember to eat now! It’s great.

The set up I had in my studio room in Boston was ideal. and I had great lighting there. The good old days, that’s what I call it.

However, Virginia HQ is great because since we have a spare bathroom, I can do all my washing and drying in there which is a lovely, heavenly thing! Husband thinks so too.

I still iron on the floor sometimes, by the way. And my stuff still overflows into the other rooms now and then.

Someday I’ll have a whole separate out building just for my draftings… someday. Maybe even a house to live in!

I look forward to another iteration of merriweather HQ, but I like this one for now!