What Disney World Does That We Should Too

I watched this sweet documentary about Disney World the other day and it was like a thousand light bulbs went off… Disney World, as we all know, knows what’s up. They do it right, don’t they? But what are they doing?! And how can we use them as an example?! Here’s what I’ve noticed… 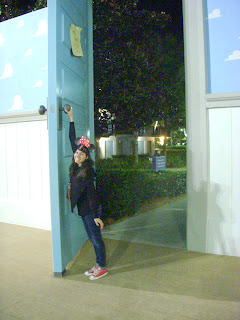 They have the signature stuff
There are a few things that EVERYONE knows and automatically without hesitation associates with Disney and/or Disney World. Mickey Mouse, Space Mountain, Magic Kingdom… these are things that we KNOW belong with Disney. They do not belong to anyone else. These are the cornerstone, signature “items” that Disney offers.
I would even say that the ambience of Disney is a signature… everyone can fill in this sentence: “the ____ of Disney” (okay, it’s magic, in case you weren’t sure.) Magic is a main ingredient of Disney’s operation… how freaking cool is that?!
Do you have a signature item? Do you infuse your items with ‘magic’?
They have their own language
Did you know that the people who work behind the scenes designing Disney are called “imagineers”?!  And when the park stays open late it’s not just “open late” it’s Magic Hours. How cool does that sound!?
Can you develop your own terminology to create a stronger more unique brand?
Disney doesn’t sell a product
It sells an experience. It doesn’t even sell “vacations” really… it sells experiences. Memory making, family fun times. They offer people something they will value forever, not just a product, not just a vacation, not just a meal.
It’s not just a theme park, it’s Disney World. It’s not just a restaurant it’s a retro drive in. It’s not just a zoo, it’s a safari…
Are you selling a shallow product? Or are you selling an experience?
Seamless Branding
Mickey Mouse ears.
Swoopy, bubbly text.
A cast of recognizable characters.
Symbolic imagery…
Disney has a seamless brand. Everywhere you look, you see mouse ears…. it’s actually a game and you can buy a guide book to tell you where all the hidden Mickeys are. From the tiniest details to giant topiaries…  there’s Mickey Mouse!
Another part of Disney’s branding is the fact that they operate under the original intent of Walt Disney and they do not waiver – they work with this original idea to bring about new and exciting additions every year.
Are you staying true to your original intent? Is this part of your brand? Is your brand completely consistent and recognizable?
Something for everyone within their market
It’s obvious that Disney caters to families. But families aren’t all the same. Some families are all adults, some families have lots of kids, some families have teenagers and babies and grandparents.  Some families want to stay at Disney for more than a week, some don’t. Some families have a larger budget than others.
Disney caters to all of these. They haven’t left their target market – they are still marketing to families who want to vacation together, but they have something for everyone within that market. There are family rides, rides for thrill seekers, rides for pansies like me who don’t like rides, non ride type attractions, educational type things. There are themed restaurants and casual dining and upscale, fancy, dress up restaurants.  There are accommodations for older people and young children, there are hotels at every price point.
Disney World is not a place for rowdy teenagers to go on spring break to get drunk and such. It is a place that you can take your grandmother. It caters to a variety of kinds families, but it caters mostly only to families.
So can you offer something for everyone in your target market?
What else? There’s so much more we can learn from Disney and other big businesses. If you know something leave a comment, let’s chat!