Why I Changed My Social Media Usernames + What Happened Next 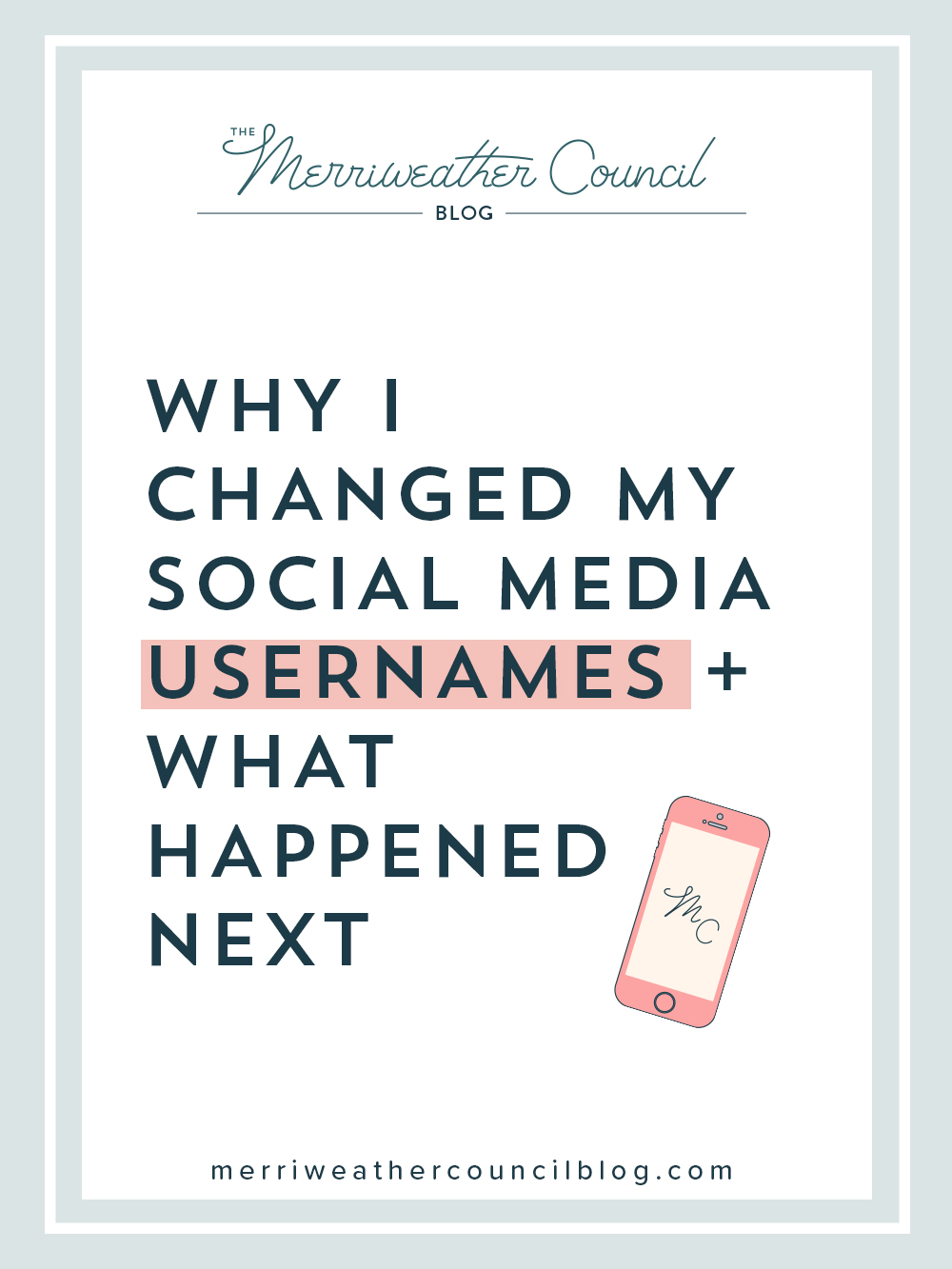 Five weeks ago, I announced a new project  – She Percolates -I am working on with my friend Jen over on Instagram. You might’ve heard me speak about it there or elsewhere on social media. I wasn’t planning on posting a fully report here until after it launches.

With the inception of She Percolates, my desire to blog more often on Four Years In, and with the restructuring of Merriweather Council, I decided that in order to fully support all these projects, I needed to make some changes to my “online presence.”

I am bringing all my projects under the umbrella of the one thing they have in common: ME. I am shifting more fully into being an entrepreneur – not just a business.

Deciding what my “online persona” was going to be is something I have struggled with over the years A TON. Was I Danielle? Or was I Merriweather? Was I a mix? What kind of mix? How much mixing can be done under a business handle rather than a personal one? I’m still not sure – but it’s something I hemmed and hawed over for multiple years. I have always been “merriweather council” on social media, and that felt fine (not absolutely right, just fine) until late 2013 when my life was no longer all about living, breathing, eating merriweather council.

I’ve never fully had a “plan” for social media. (I never had a plan at all for any of this, actually.) Over time, I began to understand how each social network was unique and how it could be working for me. I find that for me – Instagram can connect me to customers and colleagues, whereas I see twitter mainly as a way to connect with colleagues and other businesses. Twitter is kind of like “office talk” for me and I like that. Pinterest is a mix of personal interest bookmarking and connecting to customers, and Facebook is exclusively a way to connect with customers. So each has their purpose. Only recently have I really tapped into that though.

At the start of 2014 I set about the year with the intention to grow some of my followings – I focused mainly on Instagram. I had been using instagram MAINLY for business purposes for the past 8 or so months. I felt I really hit my stride – like, finally got it – over the summer. That was happening as I was shifting into my new projects and better understanding of my bigger picture – so as the year ended, I made the change to my username in order to more fully support my expanded vision and new direction. It felt very natural at that point.

I am now using my @daniellespurge accounts as distribution points for my other content. 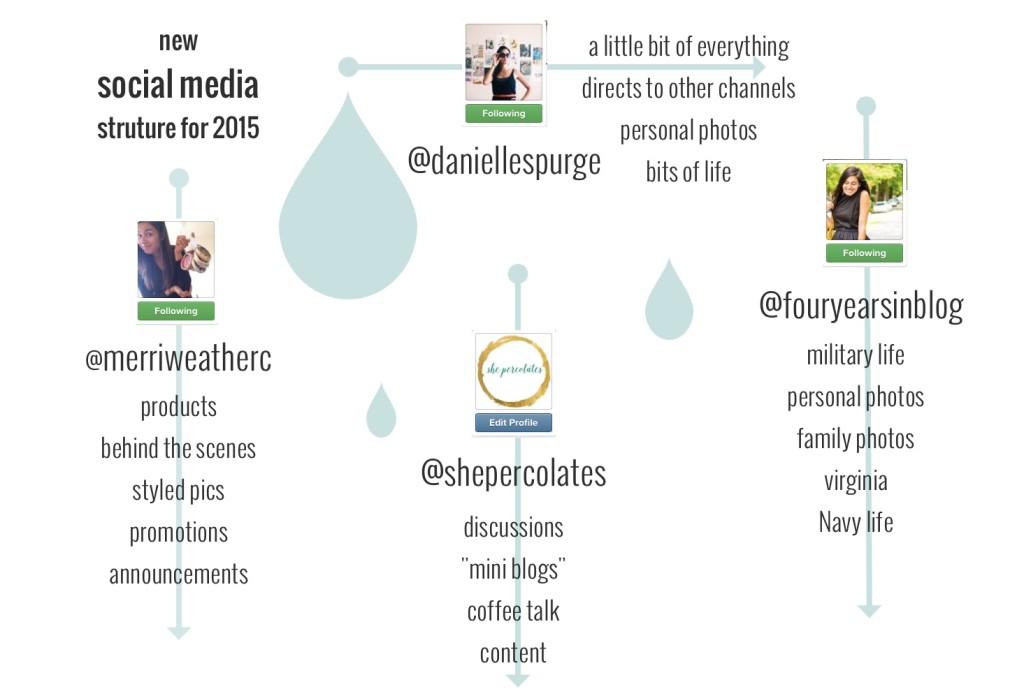 So as not to completely squander the past four years of establishing the recognition associated with @merriweatherc (not to mention the hundreds of business cards I have with that info on there) I turned another existing account into @merriweatherc on instagram and turned a private account public, also switched the name to @merriweatherc, on twitter. So if you did follow or mention @merriweatherc, I’ll still be on the other end.

I’ve essentially started over with my merriweather accounts – with significantly less followers – and in a way, with my Danielle account too, because I’ll be using thes. Now that I feel more aware of how to leverage the power of social media, I can begin working to implement some of the things I have learned over the past few years in a way that will make more sense for my audience(s) and for me.

I’ll be posting relevant content to each of my channels – and mentioning anything major on my @daniellespurge accounts. My main goal right now is to organize my posts across the channels with my hashtags  #fouryearsinblog #merriweathercouncilblog #merriweathercouncil #shepercolates.  And #creativelifehappylife. That’s a priority for me moving forward. Everything else will fall into place.

It’s only been about a month since I made the switch on Instagram (the first account I made the switch on) and I could’ve picked a better time. I made the change on the same day Instagram began it’s scrub of fake/ spammy/ inactive accounts. So I lost a bunch of followers – but I think it’s safe to say I would’ve lost them either way.

After the scrub was completed, I did still see bundles of followers leaving – and I think a lot of that has to do with the change in content. It was sudden, I admit.  I really don’t consider it a loss though. I see it as a realignment. I’ve actually stayed about the same number of followers – it’s just that people are leaving and new people are coming – and I think once I settle into a schedule and a general expectation is established, this will even out and begin to grow again. I’m honored anyone has tolerated me this much, actually, and I can see who my most loyal followers are and I feel very lucky to have great people like that supporting me.

On my other networks, everything is about the same. I see people change their Twitter handles pretty frequently, so I don’t consider it to be as big of a deal there. Twitter displays your handle and your name as well, fairly prominently – so it wasn’t as mysterious or noticeable there. Because I had identified my Facebook page as being a place to primarily connect with buyers of my products, I have left my business Facebook page as it is. I won’t be making a personal brand page though. Facebook has very little appeal to me at the moment, and I don’t need to have ANOTHER account.

Related to this, I ended up deleting my @fouryearsin handle on twitter – and I’ll be using my personal account to distribute that content directly to or from the blog. I wasn’t using it at all, and it seemed silly to have – so I just nixed it.

I can’t say I did all this changing without feeling a little weird. I felt bad that I had done it sort of off the cuff without much warning and I think maybe some people were confused. It’s hard because the viable lifetime of a SM post is generally pretty short – so it was either risk repeating myself over and over and being annoying, or just chug along and possibly confuse people if they realized later they were no longer following @merriweatherc. Either way, it was going to be a bit of an adjustment period for us all.

When I first started this shift – away from only Merriweather work, and into a fuller picture of myself as an entrepreneur – I felt a little bit like, “this is HUGE big deal”… now I know that it isn’t. People evolve in their work all the time. It’s actually a really great thing! I’m more than Merriweather Council and Merriweather Council doesn’t have to be the same thing year after year.

I’m in a place where I am starting fresh with multiple things, and I’m excited to see where it all goes. Social media handles is a small part of my bigger shift.

I would love to stay connected to you! The place I hang out the most is Instagram and I would love to see you over there @daniellespurge … or @merriweatherc (or any of the others, really)

I’m looking forward to hearing your thoughts on this. Have you struggled with using your name vs. your business name online? Have you ever changed your usernames across the board?